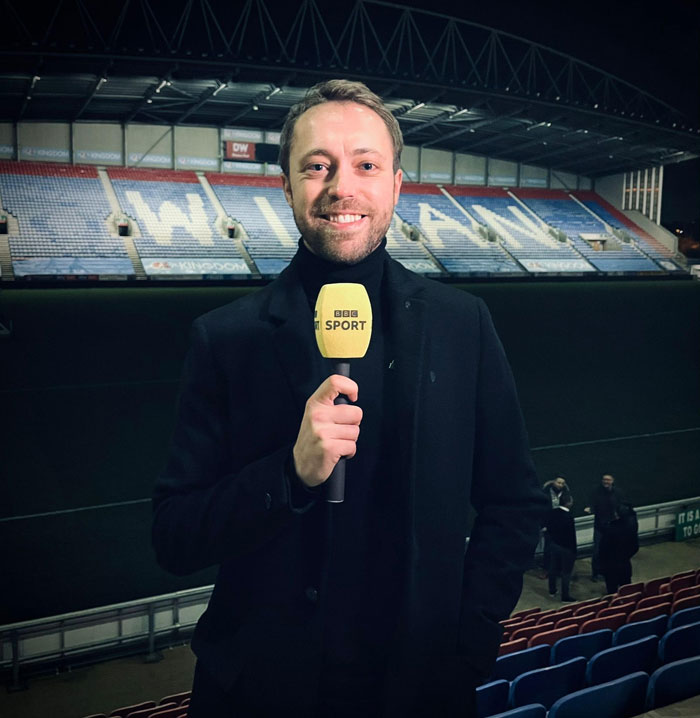 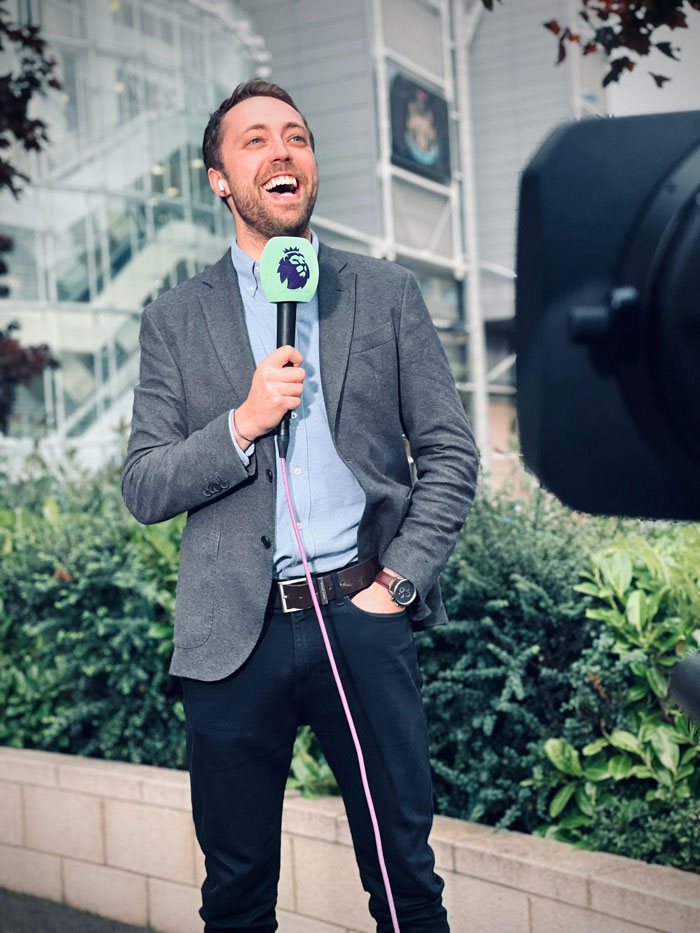 Over his career, Andy has developed an instantly recognisable and distinctive broadcasting style, blending his engaging, entertaining personality with an in-depth knowledge of a staggering range of sports, presenting and reporting on football, rugby, boxing, cricket, tennis and swimming.

After his early years competing as a national swimmer, he’s moved from a grounding in local television to being trusted and respected by the world’s leading broadcasters.

Breaking into the media as Made TV’s sports presenter and reporter, Andy presented coverage of the 2016 Olympic and Paralympic Games and the Rugby Union World Cup as well as a weekly football show covering everything from the Premier League to Non-League.

A rare commodity in the broadcast industry, Andy operates as well off-screen as he does on it; self-shooting and editing sports reports for Made’s daily news programme, securing exclusive interviews & breaking news across 14 sports.

Going freelance in 2017, Andy was quickly picked up by a range of broadcasters, presenting match build-up and studio coverage of the Champions League and Europa League for William Hill before being approached by globally-renowned Premier League Productions.

In the years since, Andy has established himself as one of PLP’s most trusted reporters, broadcasting live to an international audience of over 900 million and covering the biggest breaking news stories and transfer updates from Newcastle Utd. He’s also a regular feature in pre-match press conferences across the country, as well as interviewing the biggest names in football on a weekly basis.

Recognised as one of the most diverse broadcasters in the industry, Andy is often seen and heard on Saturdays reporting for one of BBC Sport’s flagship programmes, ‘Final Score’ – delivering his unique, entertaining updates from a range of matches across the UK.

He’s also across the country’s airwaves too, providing match updates and breaking news into BBC Radio 5Live Sport, as well as conducting post-match interviews for Match of the Day.

Away from broadcasting, Andy is an incredibly experienced live event host too. He’s currently Durham Cricket’s T20 and Newcastle Thunder’s stadium presenter and is a highly sought after name for awards ceremonies and corporate evenings.

An accomplished voiceover artist featuring for the likes of PLP, BMW and Mini, Andy truly is the complete broadcasting package and when he’s not running/swimming/playing any form of sport, now aims to establish himself alongside the biggest names in the media industry!

Linkedin
We use cookies on our website to give you the most relevant experience by remembering your preferences and repeat visits. By clicking “Accept All”, you consent to the use of ALL the cookies. However, you may visit "Cookie Settings" to provide a controlled consent.
Cookie SettingsAccept All
Manage consent

This website uses cookies to improve your experience while you navigate through the website. Out of these, the cookies that are categorized as necessary are stored on your browser as they are essential for the working of basic functionalities of the website. We also use third-party cookies that help us analyze and understand how you use this website. These cookies will be stored in your browser only with your consent. You also have the option to opt-out of these cookies. But opting out of some of these cookies may affect your browsing experience.
Necessary Always Enabled
Necessary cookies are absolutely essential for the website to function properly. These cookies ensure basic functionalities and security features of the website, anonymously.
Functional
Functional cookies help to perform certain functionalities like sharing the content of the website on social media platforms, collect feedbacks, and other third-party features.
Performance
Performance cookies are used to understand and analyze the key performance indexes of the website which helps in delivering a better user experience for the visitors.
Analytics
Analytical cookies are used to understand how visitors interact with the website. These cookies help provide information on metrics the number of visitors, bounce rate, traffic source, etc.
Advertisement
Advertisement cookies are used to provide visitors with relevant ads and marketing campaigns. These cookies track visitors across websites and collect information to provide customized ads.
Others
Other uncategorized cookies are those that are being analyzed and have not been classified into a category as yet.
SAVE & ACCEPT